On a less serious note:
It’s April Fools’ Day: time for what the French call poissons d’avril!
So let’s have some geese. 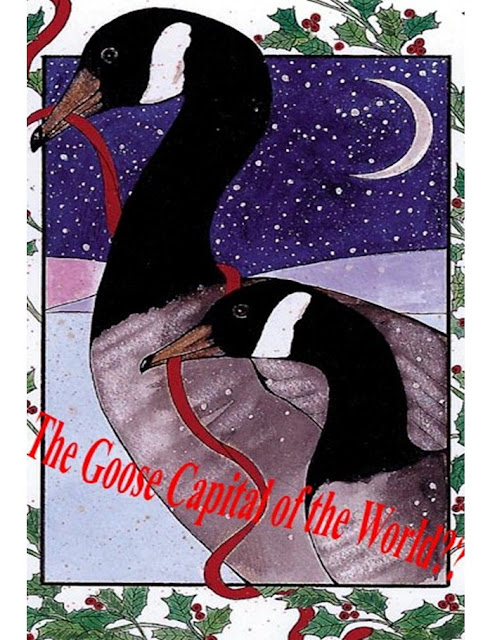 I came across the curious offering below when I was trying to figure out how to catalogue an item on the confluence of the Murray and the Darling and concluding you can’t, because neither the Library of Congress nor the National Library of Australia have managed to establish authorised subject terms for the concept. However.

Okay, have we got anything on “geese” or “goose” at the Royal Geographical Society of South Australia? Ooh, yeah!

Any more? Yep, I found one. One of our 19th-century works of exploration is by Aubyn Trevor-Battye, a naturalist and explorer whose travels took him to Kolguyev Island in the arctic regions of Russia:

Trevor-Battye, Aubyn, 1855-1922. Ice-bound on Kolguev : a chapter in the exploration of Arctic Europe, to which is added a record of the natural history of the island. Westminster : Constable, 1895.
He describes the local people, the Nenets (whom he refers to as Samoyed) who came to the island in summer to graze their reindeer and trap geese to trade. Trevor-Battye’s is an interesting story: he travelled widely and finally died in Las Palmas in the Canary Islands, a far cry from the chill of the arctic islands!

Well, it is April 1st, so I’ve got to say it: the author’s name makes it better!

So, getting carried away, let’s look for some actual poissons! 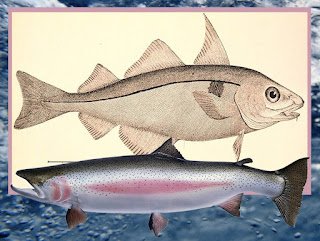 We do have some marvellous works of exploration in French or translated from the French but alas, I couldn't find anything which mentions poissons. But here are a few of the battier fishy ones:

Tennent, James Emerson, Sir, 1804-1869. Sketches of the natural history of Ceylon : with narratives and anecdotes  illustrative of the habits and instincts of the mammalia, birds, reptiles, fishes, insects, &c. : including a monograph of the elephant and a description  of the mode of capturing and training it. London : Longman, Green, Longman, and Roberts, 1861.

Hefffalumps and fish? I must be making it up? No, I’m not! ’Cos here’s another one:

Williamson, Thomas, fl. 1807-1810; Howitt, Samuel, 1765?-1822. Oriental field sports : being a complete, detailed, and accurate  description of the wild sports of the East; and exhibiting, in a novel and interesting manner, the natural history of the elephant ... as likewise the different species of feathered game, fishes, and serpents. The whole interspersed with a variety of original, authentic and curious anecdotes taken from the manuscript and designs of Captain Thomas Williamson ; the drawings by Samuel Howitt, made uniform in size, and engraved by the first artists. 2nd ed. London : H.R. Young, 1819.

And what about Australia? Here’s a great title:

Beaked salmon? Beaked? No, I’m sure it’s very scientific! But gee, just when I was feeling ashamed of myself for laughing, and had decided that that the Stead in question (“Naturalist to the Board of Fisheries for New South Wales”) was a very serious, scholarly fellow, along came this one:

So let’s get out there and eat ’em, folks!

Walter’s having jolly fun, he’s after big game fish as well as whales:
Wood, Walter, 1866-. Adventures with big fish. London ; Edinburgh : T.C. & E.C. Jack, [1925]
Down South America way “Banderas” (real name unknown) is on the job: he’s huntin’ as well as fishin’:
Banderas. Sporting reminiscences of South America 1919-1921, H.M.S. Southampton. London : Riddle, Smith & Duffus, [1923]
(The H.M.S. Southampton of the title is presumably the fourth ship of that name: “The fourth Southampton was a Town-class light cruiser launched in 1912 ... She fought at the battle of Jutland. ... On 26 May 1916 she was damaged by a mine. She was repaired and survived the war. Southampton was sold for scrapping on 13 July 1926” (Wikipedia). Presumably ‘Banderas” went ashore to do his slayings: one can't quite imagine him taking pot-shots from the deck, or slinging a line over the side of a Royal Navy vessel, the captain wouldn't have approved. Unless he was the captain.) 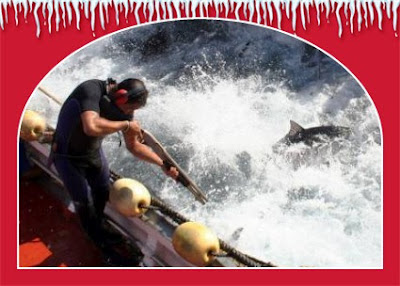 Adrian’s hard at it off the coast of Africa, jolly good show, sir! And congratters on that romantic title!
Doyle, Adrian Conan. Heaven has claws.  London : Murray, 1952.
(According to the Antiquarian Angler it’s about “Big game fishing off the African coast. Adventures in the coral islands of the Mafia Channel, the seas of Zanzibar, Kilwa Kisiwani and the ruins of the Palace of Songa Manara.”  www.antiquarianangler.com )

And there’s a Welshman in Scandinavia, not only eating ’em but carrying out serious study as well. Did he dissect them and then eat them, or...?
Lloyd, L. (Llewelyn), 1792?-1876. Scandinavian adventures : during a residence of  upwards of twenty years; representing sporting incidents, and subjects of natural history, and devices for entrapping wild animals. With some account of the northern fauna. London : R. Bentley, 1854.

Over California-ay-aye way, Horace is at it, too. Huntin’ and fishin’, yep!
Vachell, Horace Annesley, 1861-1955. Life and sport on the Pacific slope. Colonial ed. London : Hodder & Stoughton, 1900.
(Ooh, look, it’s a Colonial edition, so us lesser breeds without the law are entitled to have a read of it!)

There’s lots more but that’s more than enough. If you want to know what else we’ve got, including, yes, some on trout, try the catalogue at: http://rgssa.slimlib.com.au:81/vufind/ Personally, I can come at catching them in order to sustain life, but is there anything sillier than hurling a minute, laboriously tied thingo on the end of a very long string at an uninterested fish that knows perfectly well that it bears no relation whatsoever to its normal food, and may one time out of three thousand, if very bored or very curious, snap at it just for fun? And then throwing the fish back? Well, hitting a very small ball with a very long stick, possibly. Although possibly not, when you consider that the GIANT rainbow trout at Rotorua happily eat cake from the tourists’ fingers, or certainly did last time I was there. One for you, Marie Antoinette! 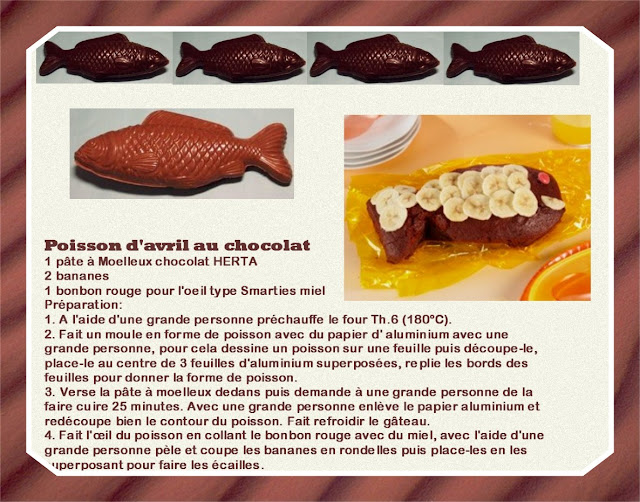 The recipe above is for kiddies. Basically, if your French isn’t quite up to it, use a chocolate cake mix to bake a cake in the shape of a fish. When cool, slice banana for the scales and add a Smartie for the eye. Easy-peasy! And make sure a grown up supervises!!

Giving and eating chocolate fish (very large ones) on 1st April really is a French tradition. Try an Internet search under poissons d’avril and you’ll find lots of refs. When I lived in Paris there was a large sweet shop in our quartier that my impoverished student mates and I couldn’t possibly afford to shop at. The chocolate fish were very shiny, beautifully modelled, and at least 30 centimetres long. Dark chocolate. Honest! The ones in the pic below actually don’t look nearly as up-market, but they are genuine: 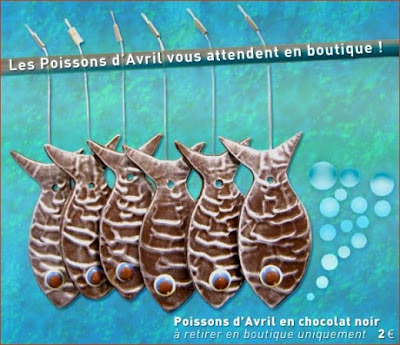 Now do you believe me? ’Tisn’t a poisson d’avril, I swear!

This post was researched and created by Kathy Boyes

Posted by the blog author at 19:35 No comments: