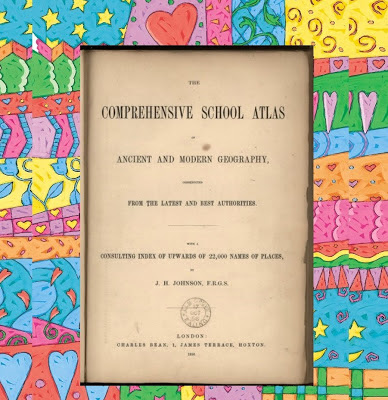 People have been asking me if I've got another post for the blog. It's very flattering, I'm thrilled that you want more, but funnily enough I've been having a break. Seems you're not entitled if you're a blogger. (I already know cataloguers aren’t entitled.) It takes a while to research a new topic. So for the moment I'll just tell you about a unique atlas I've only just finished cataloguing for the Royal Geographical Society of South Australia. Sorry I couldn't get it posted in time for Valentine's Day but I found a very cheery Valentine frame for its title page.

The RGSSA does hold a lot of atlases, yes, some of them very old indeed, but even the very rare and valuable ones are, we know, also held somewhere in the world. This newly acquired one is not very big, only about as tall as an A4 page, though it is quite thick, and I suppose its maps aren’t that thrilling, but they are coloured, a big plus. What is exciting is that no other library in the whole world appears to hold a copy of it! I searched all the major online databases but I couldn't find an entry for it.

I couldn’t verify the author's first names: he isn't in Library of Congress Authorities. I think he might be John Hugh: the author of a contemporary atlas was given as this in one English database, but that record was very sketchy, not useable as an authoritative source. So all we really know about him is that he was a Fellow of the Royal Geographical Society and produced several atlases, for various publishers. There were no other instances of atlases under his name published by Charles Bean of London. True, I could have spent a lot more time trying to check his name, but with no guarantee of success and with approx. 5,000 other books waiting to be catalogued...!


I've picked out a few maps from Johnson's atlas to show you. Some of them are bigger, with the leaves folded, but they were a bit awkward to scan. I've spared you cartographical purists out there the fancy frames – just added plain coloured ones.


Australia was on the map in 1856, yes, but only the British colonies of New South Wales and Van Diemen's Land are given much emphasis:

So why hasn't this atlas been recorded elsewhere? Well, it's a schoolbook, and traditionally they have been largely ignored by grown-up catalogues – with the result that a great deal of social history has been lost. As relatively recently as the 1970s we innocent young librarians were informed (loftily, alas) that the New Zealand National Bibliography did not list school textbooks. Some of us did thunk: Why not? Aren't they books? But knew it was pointless to voice this gormless thort. And what traditionally didn't get into the bibliographies by and large did not find its way into our modern online catalogues, and has certainly not been stored by the major libraries. Want to know what young English-speaking people were learning about the Empire on which the sun was never going to set in the middle of the 19th century? Hard cheese, they burnt those books. Or you could make a start by coming and looking at the RGSSA's unique atlas!

If you're in Adelaide and would like to view the atlas, come up to the RGSSA Library and ask at the desk. It will be available to view for some time, certainly during the Adelaide Festival this March.


This post was researched and created by Kathy Boyes
Posted by the blog author at 21:41 No comments: