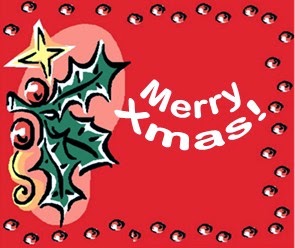 It's December already? Sorry I haven't been able to post more entries to the blog this year: I've been dogged by a horrid recurring flu virus all winter. But Sandra's great contribution means you have been able to read about some of the interesting books from the collection of the Royal Geographical Society of South Australia.

The RGSSA's recent exhibition "Out of Africa" was very successful, thanks to Heather B.'s hard work, showcasing works of travel and exploration and some fascinating old maps. However, checking the titles when it finished, I found that not all of the books had yet been catalogued online. So I hurriedly did them, and then Sandra, David B. and I had a go at some of the remaining books on Africa. (There's a lot of them! We've still got about 5,000 volumes of the non-Australian books to go.)

As always, the collection produced some unexpected delights, so here are a couple of little treats for Christmas!

MR SILVER'S LITTLE BOOK...
S.W. Silver & Co. was the firm owned by Stephen William Silver (1819-1905), the London businessman whose York Gate Library, a unique collection of works of geography, travel and exploration, many relating to the British colonies with which the company traded, is now owned by the RGSSA. By 1846 Silver had taken over his father's export and banking business, S.W. Silver & Co. With agents and correspondents throughout the world the company did much official and private business with the British colonies, including Australia. It also published handbooks and other information about the colonies for intending immigrants. This little bibliographic curiosity is one of them: 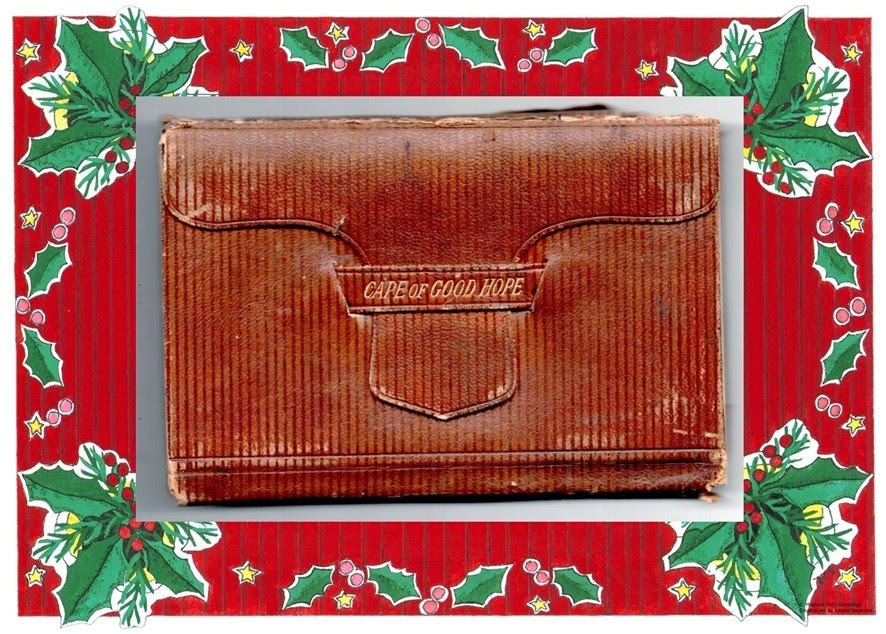 It's very cute, only 15 centimetres long, and it would fit in the pocket of your safari suit, quite easily! And as you see, it's got a flap which slips into a holder on the cover. Nifty!
Technically speaking it's not a good book. It's almost impossible to find the real title, which is actually on the fifteenth page. There's a preliminary section, with its own title page (looking more like a series title page--however!). This is the "Historical diary...", with 12 pages of text. 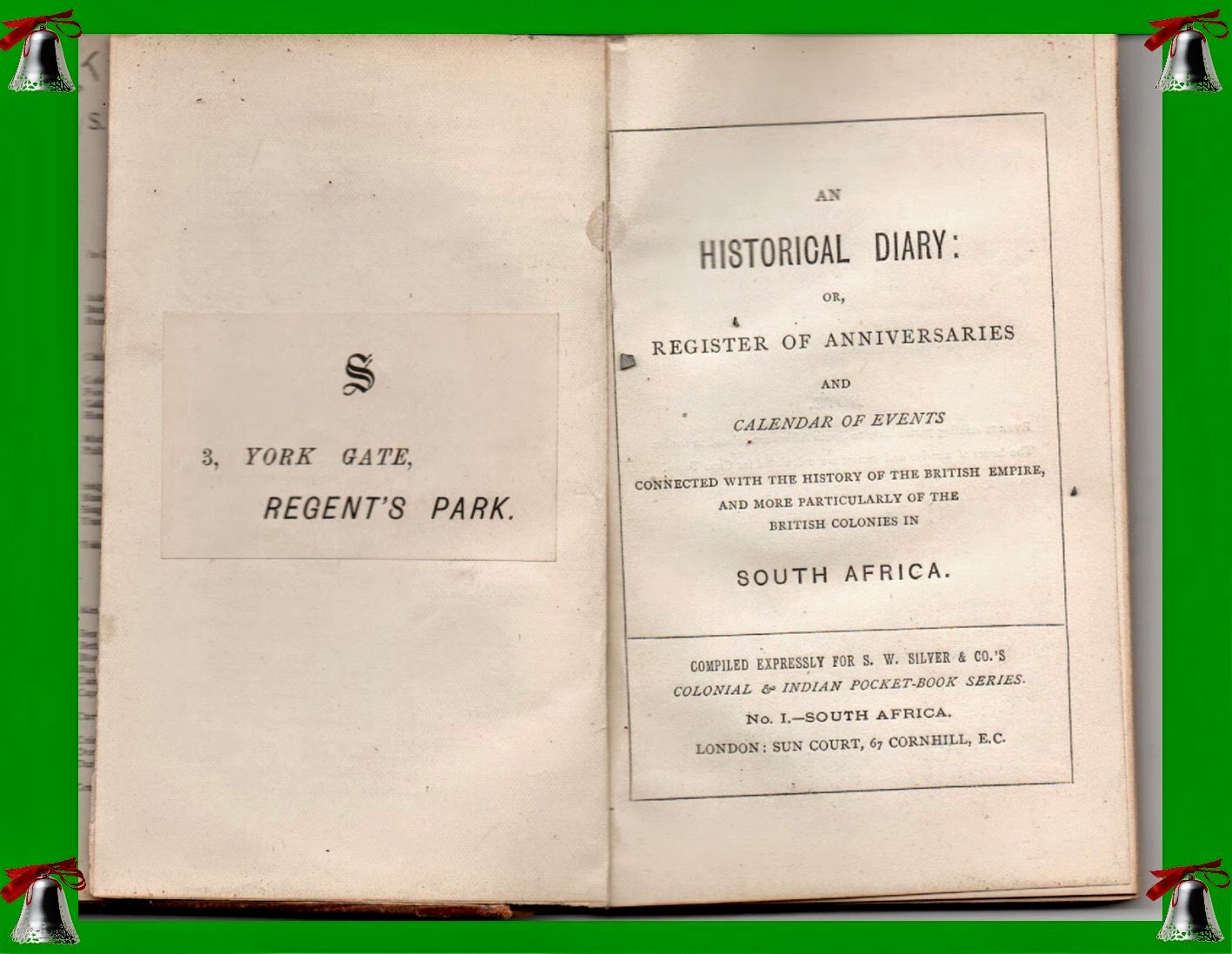 Only after that do we get the real title page: 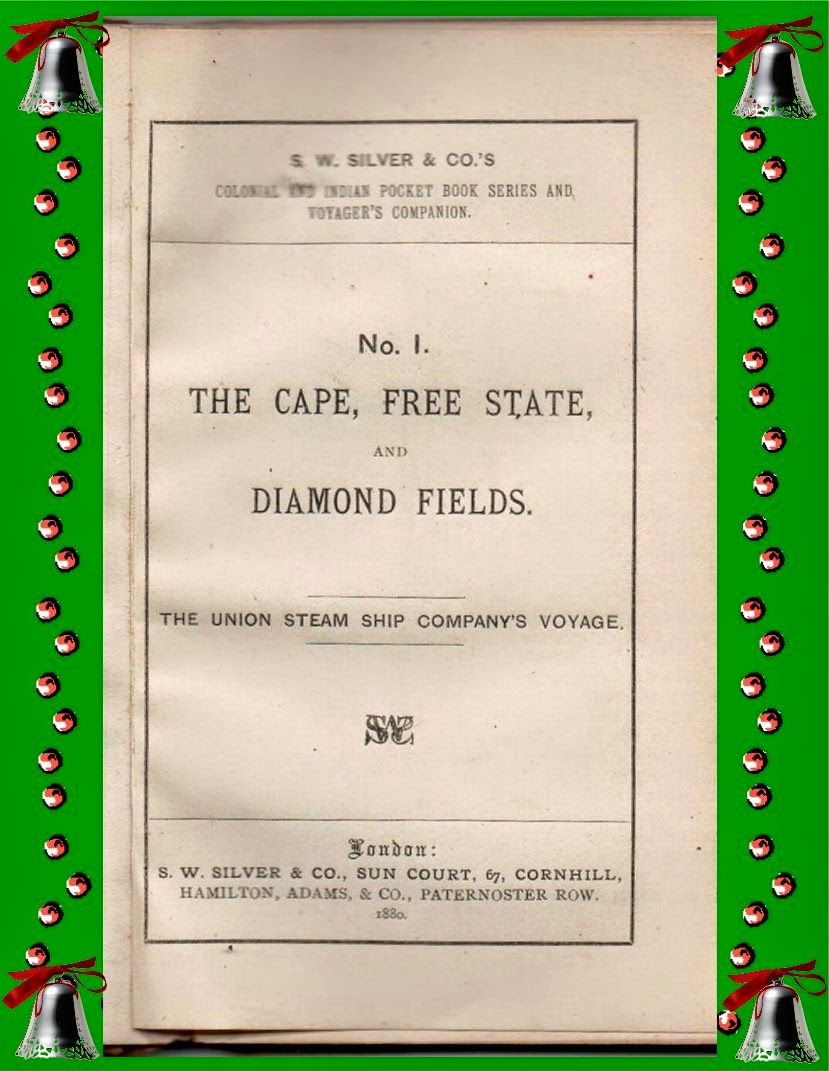 This is followed by an introduction and then a page stating "PART I. --THE BOOK." Turn over and here's the list of contents, which confusingly includes "Part II, Glossary of nautical and steam terms". Oops. Then we get the actual text, which has a caption title and a running title (at the top of each page), "The Cape pocket book". (How many titles is that?) That goes to page 78. Then a page states "PART II. GLOSSARY OF NAUTICAL TERMS." Turn over and the text starts with the caption title "Nautical and steam terms". Oh, just shoot me now! After that there are 23 largely blank, unnumbered pages which provide helpful headings and in some cases columns, allowing you to list your luggage and do your cash accounts and write down useful introductions and make a log of the voyage... As the text is all in very, very small print the intrepid 19th-century traveller would have had to have very good eyesight indeed!
The tiny book comes with two pockets, one at the back, which in our copy is empty (maybe meant for your own notes?), and one in the front with a folded map in it: 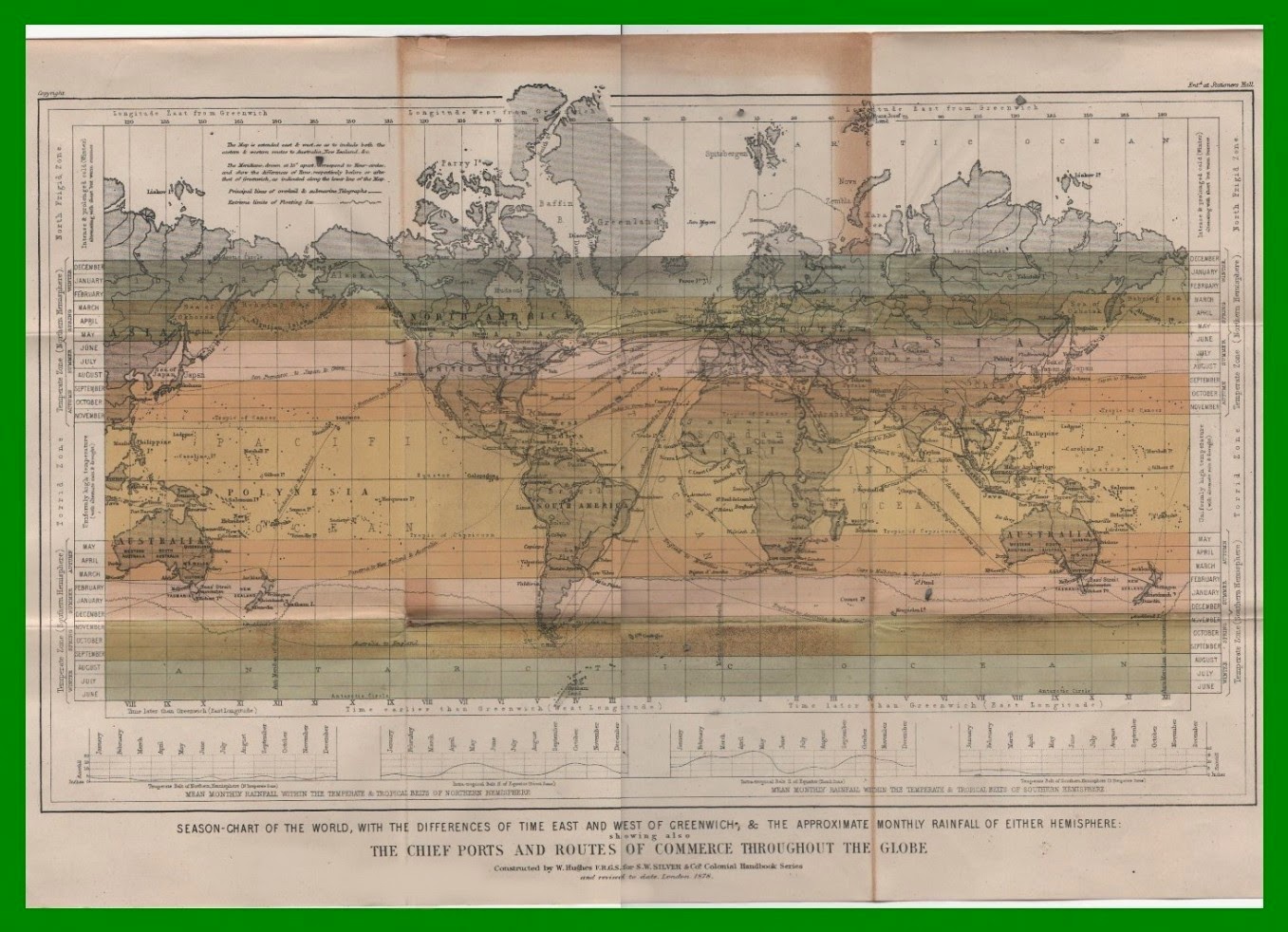 "Season-chart of the world, with the differences east and west of Greenwich; & the approximate monthly rainfall of either hemisphere: showing also the chief ports and routes of commerce throughout the world. Constructed by W. Hughes, F.R.G.S. for S.W. Silver & Co.'s Colonial handbook series and revised to date. London, 1878."

...AND A HELPING OF GROUSE
Well, it's Christmas, grouse is appropriate (I think). A bird the bloodthirsty English start shooting on the Glorious 12th, isn't it? The RGSSA's collection is stuffed (culinary motif) with travel books by great white hunters. The author Parker Gillmore is a prize example.

I've got a formula for cataloguing these books, so once I work out where the hunter travelled to (not easy: most of them don’t bother to say, and Africa's a large continent), I assign the appropriate subject headings, check for any interesting illustrations, hoping they're not all going to be of dead game, and that's it. I was about to dismiss Mr Parker's The Hunter's Arcadia as typical--well, I ask you! What a title!--when, desperately seeking enlightenment from the preface as to where he went, I happened across a mention of S.W. Silver & Co.!

"Messrs. Silver and Co., of Cornhill, can supply the wanderer with anything, and what is procured from this firm is sure to be excellent. Their portmanteaux, travelling bags, waterproof sheets and clothing cannot be too highly commended, while their gun-pads for reducing recoil are almost indispensable for firing such heavy charges as are now in vogue for killing large game. Fail not to have one of their revolvers. As far as natives are concerned they are not necessary, but there are some bastard descendants of Europeans knocking about, and this weapon is better than argument with such wild beasts. They (Messrs. Silver and Co.) can also supply the hunting-coat I always use, which will be found not only cool but capable of resisting thorns. Their explorer's room is always worthy of a visit, and the attentive and courteous employés of the firm thoroughly understand the use and appropriateness of each article. As your travelling is done by wagon you need not fear overloading yourself."

Jolly good show! Then I came across a charming illustration (no credit supplied for the illustrator, sadly). The accompanying text, which threw quite a new light on Mr Gillmore, tells us that he was out with a party of local people who were hunting birds and sighted some sand grouse, some of which they managed to catch by throwing their "kerries". Gillmore himself didn't take part and when offered some of the bag he refused, knowing that grouse need to be simmered for at least three hours to be palatable to a European. The hunters had been having him on: they just laughed. Clearly in the past he must have hunted grouse, but at this time he just observed them: 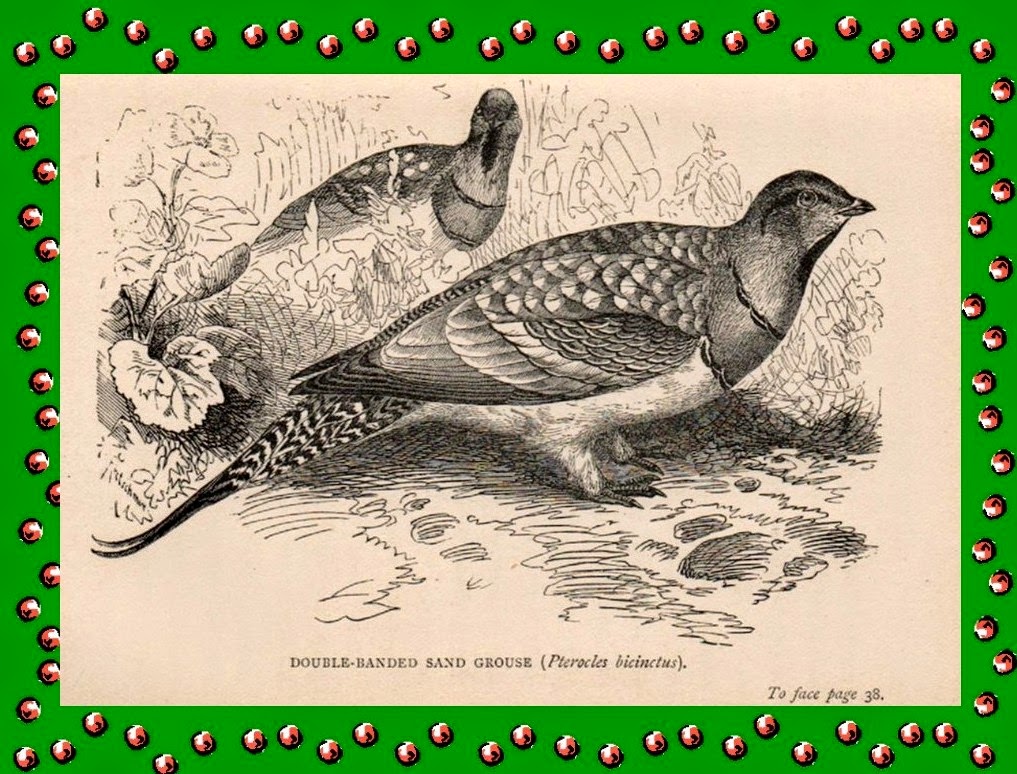 "To me, sand grouse occupy the same relative position towards birds that Kate Greenaway's or Caldecott's children do to the human family. They are, in very truth, regular little Dolly Vardens in perfection of outline, beauty and variety of plumage, and in grace and energy of movement, while their little feather-trowsered legs impart an air of modesty that is most piquante. Those folks that have crossed the Atlantic have doubtlessly heard "bees" spoken of by our cousins. Now there are several kinds of "bees" in America, such as quilting "bees," logging "bees", and husking "bees." The double-banded sand grouse has a "bee" of its own, which I will designate a courting "bee." About midday, in spring, these little pets will assemble, possibly to the number of a dozen, and dance the most extraordinary and intricate figures, in which all take a part. From the back of an ant-hill I have often watched them at this amusement. In it there is none of the poetry of the gliding waltz, but all the energy and go of the Scotch reel..."

Lovely, isn't it? It's typical of Gillmore's rather discursive style; it can be charming, but his refusal to pinpoint localities becomes very frustrating! It appears from the preface that this time he was in Bechuanaland (modern Botswana), having travelled there via South Africa. Unfortunately his books intersperse such descriptive passages with the typical hunter's litany of the game, big and small, he slaughtered, so don’t pick one up expecting it to be to modern tastes! --Well, yes, I would eat grouse, if offered, but I wouldn't march all over Africa killing antelopes and leopards and lions and whatever else was around: I can't really relate to a person who writes "I took my shot-gun and proceeded up the river in search of anything edible or curious." (p. [149])

I couldn't find a recipe for grouse or even pheasant in the RGSSA's antique Australian cookery book by Philip E. Muskett and Mrs Wicken (see the blog entry, "Happy Birthday Julia Child"), but just for a Christmas treat, here's Mrs Beeton's:

ROAST GROUSE.
1025. INGREDIENTS.--Grouse, butter, a thick slice of toasted bread.
Mode.--Let the birds hang as long as possible; pluck and draw them; wipe, but do not wash them, inside and out, and truss them without the head, the same as for a roast fowl. Many persons still continue to truss them with the head under the wing, but the former is now considered the most approved method. Put them down to a sharp clear fire; keep them well basted the whole of the time they are cooking, and serve them on a buttered toast, soaked in the dripping-pan, with a little melted butter poured over them, or with bread-sauce and gravy
Time,--1/2 hour; if liked very thoroughly done, 35 minutes.
Average cost, 2s. to 2s. 6d. the brace; but seldom bought.
Sufficient,--2 for a dish.
Seasonable from the 12th of August to the beginning of December.

Before I sign off for 2014, I must express my appreciation to all who have contributed to the cataloguing project this year: especially Sandra, our "distance cataloguer", who's doubled our output, David B., who's not only contributed on the technical side, but willingly helped with the shelf-check (stocktaking, to non-librarians), hauled books down from upstairs, filled in instruction sheets for Sandra, and done photocopying, and George, who's also helped with the shelf-check, hauled down more piles of books from upstairs and done photocopying. (Getting the books may not sound like much but when I tell you it entails perching on a ladder in the top gallery, 3 storeys above the floor--!! I can't thank them enough, I get dizzy if I just look down.) Thanks also to all the reference desk staff who answered my frantic appeal for help with the re-shelving, and to Liz, who's been doing yet more photocopying for the project. And special thanks to Heather C. for her great work indexing the exciting "Gill scrapbook" (more on this next year), and for finishing the transcription of the historic letters.

Wishing you all merry Christmas, happy Hanukah, happy holidays,
and all the very best for a peaceful and safe New Year. 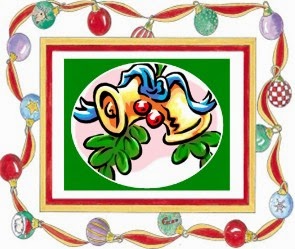 
This post was researched and created by Kathy Boyes