Discovering Asia: A New Way East - Across the Peaceful Ocean


A New Way East
Across The “Peaceful Ocean”

Continuing the "Discovering Asia" series; the exhibition opens at the Royal Geographical Society of South Australia in May.

At the beginning of the sixteenth century only the Portuguese had a right to claim new lands of the East, according to a treaty* ratified by the Pope. The Spaniards had the rights to the new lands of the West, but as Columbus and those who came after him had found, these weren’t the source of the much-prized spices. But what if they could go west, not east, and reach the Spice Islands that way? No-one had ever done it before.
* Treaty of Tordesillas (1494, ratified by the Pope, 1506) establishing a new “line of demarcation” which allotted the Spanish most of the Americas except for Brazil, but all the new lands to the east to the Portuguese

CROSSING THE “PEACEFUL OCEAN”: MAGELLAN
Magellan’s voyage around Cape Horn and across the Pacific resulted both from his disaffection with the Portuguese and from the Spanish discontent with the treaty which effectively cut them off from a share of the spice trade. Ferdinand Magellan (Fernão de Magalhães, as he is listed in modern catalogues) was a Portuguese navigator, not Spanish, and so he had been to the East Indies—but going east, taking Da Gama’s route around Africa and then across the Pacific. From 1506 he made several voyages to India, helping to wrest control of key Indian trading ports from the Arabs. In 1509 he and his friend Francisco Serrão were involved in an unsuccessful attempt to take the Malayan port of Malacca. Serrão went on to the spice island of Ternate in the Moluccas in 1511-1512. It is possible that Magellan went with him, though he was back in Portugal in 1512.

The King of Portugal having refused alike his request for an increased allowance and his proposal of a voyage to the Spice Islands, Captain Magellan renounced his Portuguese nationality and in 1517 offered his services to the King of Spain.

The Circumnavigation of the Globe
Magellan is often credited with being the first person to sail right around the world, but in fact he died in 1521 in the Philippines, only halfway. The one remaining ship from the small fleet of five he started out with in 1519 was the first European vessel to complete the circumnavigation of the world. Nevertheless his achievements are very real. 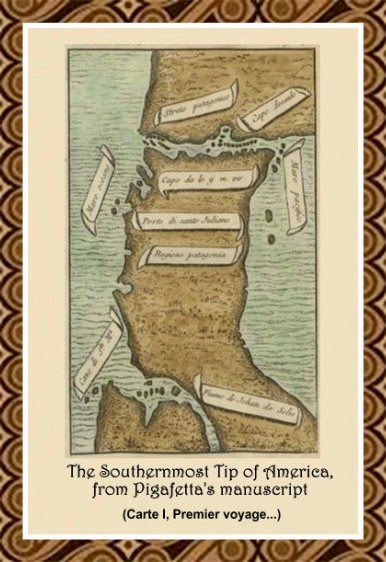 On 21st October 1520 Magellan sailed into the passage to the Pacific Ocean that is now named after him, the Strait of Magellan. By this time he had already survived a mutiny and the loss of one ship. It took 38 days to navigate the treacherous strait: during the rough voyage one ship deserted and returned to Spain. Sighting fires along the shore, Magellan named the place Tierra del Fuego (“land of fire”). The journey round Cape Horn was 530 kilometres long. In November 1520 Magellan’s three remaining ships sailed into the great westward ocean, which Magellan named Pacific (“peaceful”) because it seemed so calm.

Heading first northwards along the western coast of South America, they then turned west to cross the Pacific. Magellan’s exact route is not known but it was to the north of the many scattered islands of the South Pacific, missing several places where he could have found fresh supplies. Desperately short of food and water, with many of the crew dead from scurvy, they were reduced to eating boiled leather, rats, and sawdust. 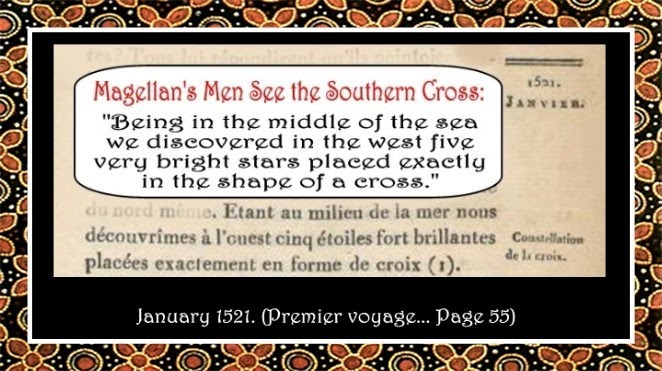 Landfall at Last: the Marianas (“Ladrones”)
At last they reached land: Guam, in the Mariana Islands. It was March 6, 1521. 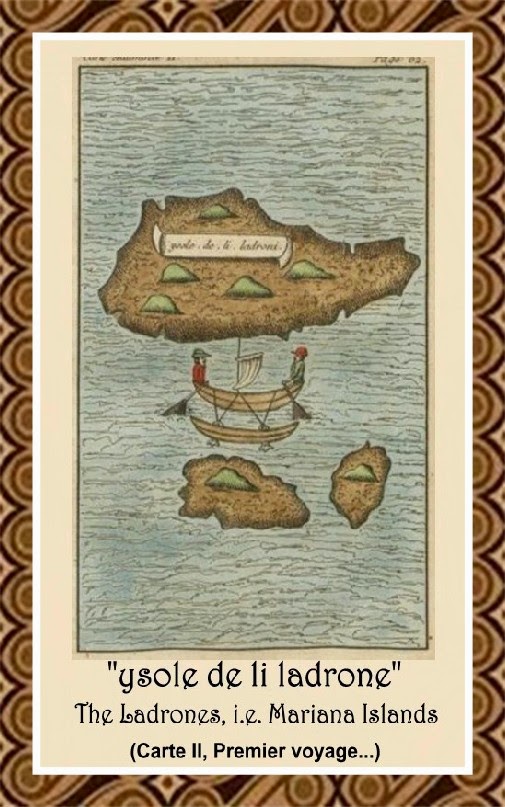 In the Marianas pilfering incidents, very possibly merely a cultural attempt to share possessions and not intended as malicious, were seen by the Europeans as theft: Magellan called the islands the “Ladrones” (“Thieves”) and took revenge.

Discovering the Philippines
Sailing westward, looking for the spice islands of the Moluccas, but in fact far to the north of them, Magellan became the first European to see the Philippines. He landed there on the island of Cebu on April 7 1521.

He was killed during an attack on the neighbouring island of Mactan, which he made in cooperation with the ruler of Cebu. His men then burned one ship to stop it falling into enemy hands, and escaped in the other two vessels. They reached the Moluccas on 6th November 1521.

Return to Spain
One ship, the Santa Maria de la Victoria, under the command of Juan Sebastián de Elcano (or “del Cano”), sailed back to Europe with a cargo of spices, crossing the Indian Ocean and rounding Africa by way of the Cape of Good Hope. They reached Seville on September 9, 1522, thus completing the circumnavigation of the world.

Spices, a New Trading Empire, and a New World Map
The cargo of spices carried back to Spain paid for the entire cost of the expedition. However, Magellan’s route round Cape Horn via the Strait of Magellan was too long and difficult to be a practical way to the Spice Islands, and Spain sold her interests there to Portugal. But Magellan’s bold expedition laid the foundations for trade across the Pacific between the New World of the Americas and the East. Spain did not at first recognize the importance of the Philippines, but by the end of the century Manila had become the greatest Spanish trading centre in Asia.

Magellan’s voyage demonstrated incontrovertibly that the world’s oceans were linked and finally abolished the belief dating back to ancient Greek times that the Indian Ocean was landlocked. Cartographers were at last able to estimate the true size and shape of South America, and the full vastness of the Pacific Ocean. Above: The new map of the world:
A 1599 2-hemisphere map from the engraved title of part 8 of De Bry’s “Grands voyages” , i.e. Americae pars VIIII (YG 2037)
“Mare Pacificum” is in the centre, where the 2 hemispheres meet

Magellan: Early Texts from an Eyewitness: Antonio Pigafetta
Antonio Pigafetta was an Italian nobleman from Vicenza who sailed with Magellan in 1519. Little is known of his earlier life. Pigafetta was wounded in the Philippines, but survived. Officially a supernumerary, he acted as Magellan’s assistant and kept an accurate journal which later helped in his translation of a Philippine language, Cebuano, the first recorded document on this language. His account of the first circumnavigation of the globe, Primo viaggio intorno al globo terraqueo, is a seminal work used as the basis, often unacknowledged, for subsequent accounts of the voyage.
Pigafetta’s account of Magellan’s voyage appears in the collections of travel narratives of both Ramusio and Purchas (see previous blog for full bibliographical details): 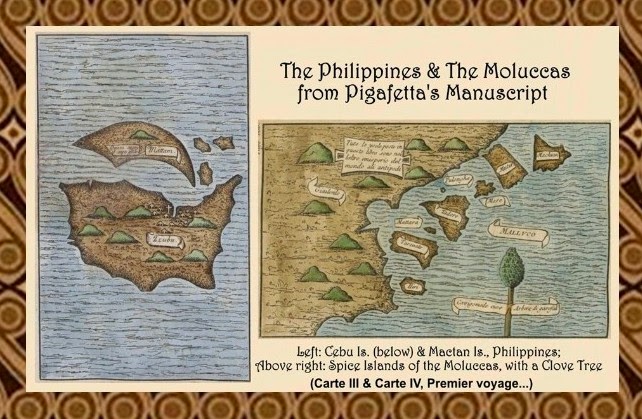 This is Pigafetta’s eyewitness account of the circumnavigation of the globe undertaken by Magellan in 1519. The manuscript used was probably a copy of one of the ones Pigafetta presented to several illustrious persons of his time (preface, p.l [50]). It is a faithful translation, including the author’s errors of fact, and with copious footnotes by the editor. A set of maps is included, some taken from the MS, others supplied by the editor. This is a vivid account, with many details of places, peoples, food plants, spices, and animals and birds observed—Pigafetta was the first to describe a penguin. Also included are an extract from his treatise on navigation and his notes on the early German cartographer Martin Behaim’s extraordinary globe, the “Erdapfel” (“earth apple).

After Magellan’s feat, other expeditions under Spanish auspices would venture into the great ocean from the Americas, most notably that of the Portuguese explorer Pedro Fernandes de Queirós (d.1615), who features in Australian literature because of his claim to have discovered the “great southern land”. In terms of the European discovery of Asia his earlier voyage with Álvaro de Mendaña de Neira in 1595 is much more significant. After reaching the Marquesas, Mendaña died. Queirós took command and managed to reach the Philippines against strong odds, in February 1596, “one of the greatest feats in the record of Pacific navigation.” (ADB).

Magellan’s voyage of course began European contact with the Philippines. The RGSSA’s May exhibition, “Discovering Asia”, will include books on the later contact between East and West in the Philippines.

In the centuries immediately following Magellan, however, the principal way to the East and its precious spices was to be Da Gama’s way. 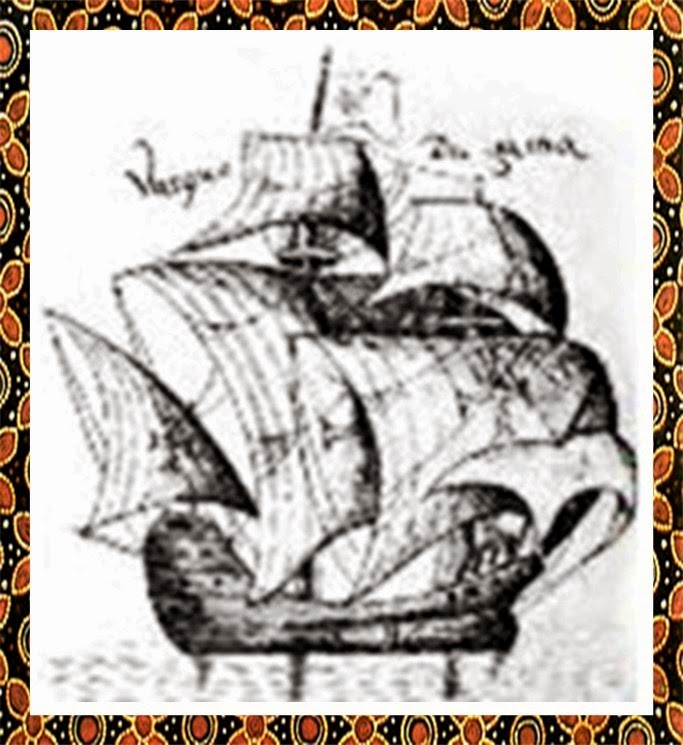