Has anyone seen our dragon? It's gone missing! 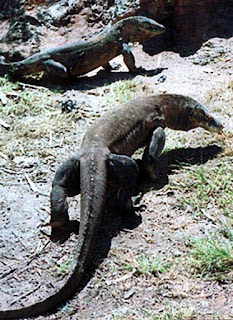 One morning teatime towards the beginning of this year we were talking about dragons at the other library where I volunteer - because it’s the Chinese Year of the Dragon. When I mentioned the Royal Geographical Society of South Australia’s book Dragon lizards of Komodo, Susan, who like me also volunteers at RGSSA, suggested I write it up for the blog. Great idea! Especially since I love lizards of all descriptions. Oops, the book’s gone missing. It might just be misshelved, and we are embarking on a shelf-check as part of the current cataloguing project. But on the other hand, it’s had - not 100 years, like a large part of the collection, but a very long time to go missing, with volunteers coming and going, and until very recently no-one managing what went in and out.

So if anyone spots our dragon, please bring it to the desk for shelving! Or if you've got a copy you can spare, it would be lovely to have a replacement. This is it:

Burden, W. Douglas (William Douglas), 1898-1978
Dragon lizards of Komodo : an expedition to the lost world of the Dutch East Indies. New York : G.P. Putnam’s Sons, 1927
Burden was an American naturalist and explorer; as well as writing this book he also produced a documentary film "The Silent Enemy" on the Indians of North America. The gigantic Komodo dragons, native to a few islands of Indonesia, including of course Komodo Island, had already been discovered by Europeans, but it was largely Burden’s book about his trip which brought them to the attention of the Western world. He cane back with 12 preserved specimens and 2 live ones, and it was he who coined the name “Komodo dragon,” now the common name of Varanus komodoensis.  It’s also said that it was his expedition that was the inspiration for the original King Kong movie.

Komodo dragons - I could go on for some time - are absolutely fascinating. Not only are they enormous relics of the reptilian megafauna of Indonesia and Australia, they are carnivorous, and can be parthenogenetic. That is, if isolated, e.g. on a small island away from any males, a female Komodo dragon can reproduce without fertilization. Unlike all other lizards, they will hunt in groups. Want more? There’s a lot! Wikipedia has a very detailed article on these extraordinary creatures.

Once I got started on lizards I couldn't stop, of course. Sadly, not much resulted from a keyword search in the catalogue. But I have come across a few books in which our intrepid explorers and travellers wrote about lizards, so here they are:

Bates, Henry Walter, 1825-1892
The naturalist on the River Amazons : a record of adventures, habits of animals, sketches of Brazilian and Indian life, and aspects of nature under the Equator, during eleven years of travel. London : J. Murray, 1863. 2 v.
No, that’s not a typo! Amazons, with an S. Bates was a 19th-century English naturalist - one of the many who were also, in fact needed to be, explorers. This was the period at which Darwin put forward his theory of evolution, and Bates was one of the bright sparks who had sufficiently open minds to support it. He was best known for this expedition to the Amazon, which began in 1848 and from which he didn’t return for another 11 years. He sent back more than 14,000 species, mainly insects, not lizards, though! Eight thousand of them were new to science - imagine it! His name is remembered today in the scientific expression “Batesian mimicry,” the discovery of which emerged from his study of the Amazonian butterflies. In this curious natural phenomenon a tasty morsel which predators like to eat mimics the appearance of something that tastes nasty or is actually poisonous to the predator.
Bates observed a wide variety of life forms during his prolonged trip, and this is one of the lizards he saw:
"The Jacuarú (Teius teguexim)" = Tupinambix teguixin Linnaeus, 1758.

Forbes, James, 1749-1819
Oriental memoirs: a narrative of seventeen years residence in India. 2nd ed., rev. by his daughter, the Countess de Montalembert. London : R. Bentley, 1834
First published in 1813, Oriental memoirs is a work based on the copious notes and drawings James Forbes made during his travels in India in the 1770s and 1780s. Forbes spent most of his working life in Western India, particularly in Gujarat. The book is full of observations of the ethnology and natural history of the region.
This charming illustration from the 1st edition which, alas, we don’t hold, comes from Wikimedia Commons, as does the annotation:
“Plate twenty-five from the first volume of James Forbes' ‘Oriental Memoirs’... Fascinated by the blue lizard on the Neva tree in bloom, he observed: ‘Nothing can exceed the brilliant colouring of the lizard attempted in this plate; when the sun shone upon the blue and yellow divisions of its body, the richness baffled all attempts at imitation. The Neva tree when covered with its pensile blossoms, is one of the most elegant vegetable productions in Hindostan.’” You can certainly see the beautiful “pensile blossoms” hanging down. And the lizard’s lovely, too.

In the last example we find a picture of one of Australia’s unique lizards.

Moloch horridus, commonly referred to as the Thorny Devil
I don't think he's horrid at all! He's wonderful. As for the Moloch bit—! Moloch was a Canaanite idol in the Bible to whom children were offered as sacrifices. Well, poor old thorny devil. Just because you don’t look like what the 19th century thought a lizard did oughta.
Richard Lydekker was another English naturalist of the 19th century. He wrote many works on aspects of natural history, including some substantial volumes which became standard reference items in their time, The royal natural history being one. He wrote for both the specialist and the general reader, contributing a number of articles to the Encyclopaedia Brittanica. Many of his works were on the birds and animals of the modern world, but he was also a palaeontologist, working for the Geological Survey of India on the vertebrate fossils of northern India, particularly Kashmir, from 1874, shortly after finishing his degree, until 1882, and cataloguing the fossil mammals, reptiles and birds of the Natural History Museum, this last resulting in a massive 10-volume work (1891). He was also an important figure in early biogeography, the study of the geographical distribution of plants and animals. In 1895 he delineated the biogeographical boundary through Indonesia, known as Lydekker's Line, that separates the two biogeographical areas of Wallacea on the west and Australia-New Guinea on the east. Many of his works are profusely illustrated, some by himself, some by eminent zoological and ornithological artists of the time. RGSSA holds, amongst other works of his, another work which references the Australian fauna: A hand-book to the Marsupialia and Monotremata (1896).

I was really disappointed not to be able to find our dragon. So here is a lament for it, in the form of an apology - with thanks to Susan for the idea of the blog. 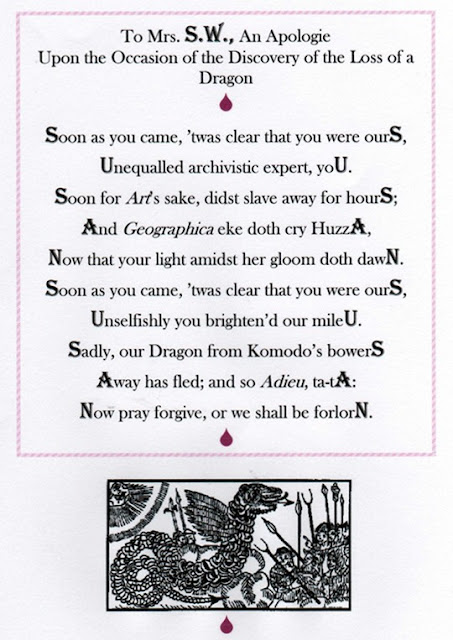 --
This post was researched and created by Kathy Boyes
Posted by the blog author at 00:42 No comments: