Gallant 600 - The Charge of the Light Brigade


THE CHARGE OF THE LIGHT BRIGADE & THE CRIMEA AT RGSSA


Following on from the Russian theme: October 25 is the anniversary of the famous "Charge of the Light Brigade" during the Crimean War. I had to see what 19th-century books we've got on the Crimean War or the Crimea in general at the Royal Geographical Society of South Australia, because the Charge of the Light Brigade raises early memories for me - I was only about 10 when I discovered an old volume of Tennyson which I rather think had belonged to Mum's mother, and so dated back to the turn of the 19th century! Many of the poems were too long and hard for me but I loved The Charge of the Light Brigade. It was first published on 9 December 1854 in the Examiner: Tennyson is said to have written it immediately after reading an account of the battle. 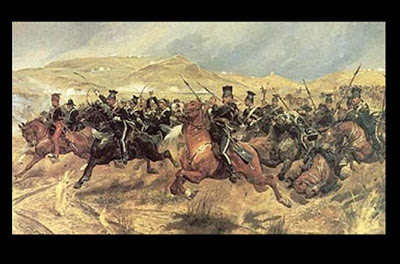 
Flash'd all their sabres bare,
Flash'd as they turned in air
Sabring the gunners there,
Charging an army while
All the world wonder'd:
Plunged in the battery-smoke
Right thro' the line they broke;
Cossack and Russian
Reel'd from the sabre-stroke
Shatter'd and sunder'd.
Then they rode back, but not
Not the six hundred.


(The picture is Richard Caton-Woodville's "Charge of the Light Brigade", one of the many British paintings which commemorate the Battle of Balaclava.)


The Charge took place on 25 October 1854. It was a disastrous defeat for the British, the sort of defeat the British do tend to memorialise. It was a cavalry charge led by Lord Cardigan against the Russian guns at Sebastopol, during the Battle of Balaclava. "Lord Raglan, overall commander, had intended to send the Light Brigade to pursue and harry a retreating Russian artillery battery near the front line, a task well suited to light cavalry. Due to miscommunication at some level in the chain of command, the sabre-armed Light Brigade was instead sent on a frontal assault into a different artillery battery, one well-prepared with excellent fields of defensive fire. Although reaching the battery under withering direct fire and scattering some of the gunners, the badly mauled brigade was forced to retreat immediately, producing no decisive gains and very high British casualties." (Wikipedia; you can read a detailed account at http://en.wikipedia.org/wiki/Charge_of_the_Light_Brigade ).


Two of the RGSSA's books on the Crimean War are:


Russell, William Howard, Sir, 1820-1907.
The British expedition to the Crimea / by W.H. Russell.  Rev. ed. London ; New York : G. Routledge & Co, 1858.
Not one of those English stiff-upper-lip military sirs, but one of the earliest war correspondents! W.H. Russell was a fascinating character, the sort of man who got on well with the lower ranks and was disdained by such as Lord Raglan. (As Raglan was responsible for the order to the Light Brigade to charge the guns, guess who comes best out of that?) Russell was out in the Crimea for 22 months covering the war, including the Charge of the Light Brigade. His dispatches from the front alerted the British public to the appalling conditions suffered by the soldiers, particularly the wounded, and illuminated the whole subject of the brutality and waste of war. "Shocked and outraged, the public's backlash from his reports led the Government to re-evaluate the treatment of troops and led to Florence Nightingale's involvement in revolutionising battlefield treatment." (Wikipedia).
Russell's subsequent career was equally exciting: in 1856 he was sent to Moscow to describe the coronation of Tsar Alexander II. Next came a journey to India to report on the Indian Mutiny (the Sepoy Rebellion, 1857-1859), where he witnessed the final re-capture of Lucknow by the British in 1858. In 1861 Russell went to Washington, later publishing his account of his experiences during the American Civil War. Next he reported on the Franco-Prussian War (1870-71). In July 1865 he sailed on the "Great Eastern" to document the laying of the Atlantic Cable. In addition to his newspaper reports he published numerous books based on his journals. 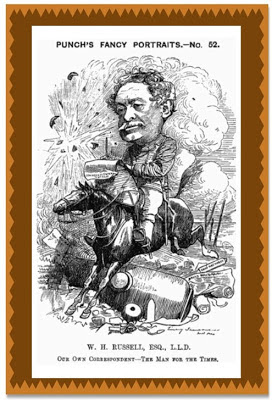 His appeal as a person is best shown in Punch's 1881 cartoon of him. His tremendous success in his career was rewarded by a knighthood - highly unusual when you consider that not only was he someone whom the aristocrats like Lord Raglan considered not nice to know, he was also an Irishman!


Sandwith, Humphry, 1822-1881.
A narrative of the Siege of Kars and of the six months' resistance by the Turkish garrison under General Williams to the Russian army : together with a narrative of travels and  adventures in Armenia and Lazistan ; with remarks on the present state of Turkey. 3rd ed. London : J. Murray, 1856.
In the Crimea the British Army fought alongside their allies the French and Turkish armies. In 1855 a little-known but serious siege took place in the eastern corner of Turkey. The British were giving assistance to the Turkish Army at the siege of Kars. In present-day Turkey, Kars has a stormy history: after withstanding a siege by the Persians in 1731 and successfully resisting the Russians in 1807, it fell to the Russians in 1828. It fell again in 1855: the Ottoman garrison led by British officers including General William Fenwick Williams did keep the Russians at bay; but the garrison was devastated by cholera and food supplies were depleted, and the town was surrendered to General Mouravieff in November 1855. Sandwith was the regimental doctor with the Royal Regiment of Artillery in the Crimea.


Probably most of us today who have heard of the Crimea associate it with the war involving the British and Russians. But in fact the area was recognised at that period as a place of outstanding natural beauty, as the following volume of lithographs bears witness:


Bossoli, Carlo, 1815-1884.
The beautiful scenery and chief places of interest throughout the Crimea / from paintings by Carlo Bossoli. London : Day, 1856.


The artist Carlo Bossoli (1815-1884) is known for landscapes, urban views, and historical and military paintings. He was born in Davesco, Italy, but his family emigrated to Odessa when he was young. At 18 years old he sold his first works. In 1845 he returned to Italy, but continued to work across Europe. At the time of the Crimean War views showing the straits of the Bosporus and the towns and forts associated with battles such as Balaklava and Sebastopol were much in demand in England.


Bossoli's paintings of the Crimea were very successful in London, and he exhibited at the Royal Academy between 1855 and 1859. In addition to many scenes of the landscape of the Crimea in the 1850s, the pictures include views of the city of Sevastopol' (Sebastopol, as it was then known), and depictions of the way of life, dwellings and costume of the Crimean Tatars (or Tartars).


One particularly striking image is a scene at Inkerman:


In British reference sources the name Inkerman is remembered as that of the Battle of Inkerman (1854) during the Crimean War, but the battle was actually fought some distance away from the small town of Inkerman, across the river on a nameless ridge between the Tchernaya River and the Careenage Ravine. Today Inkerman is virtually a suburb of Sevastopol', only 5K east of the city, with a population of only just over 10,000. It was of course even smaller back then. Its chief feature is the great rocky outcrop above the river, where in the 8th century a cave monastery of St. Clement was founded by Byzantine icon-worshippers fleeing persecution.
Bossoli's view seems to have been taken from somewhere inside the dark, cavernous holes in the rocky outcrop which we can see in this 1910 picture from Wikipedia: http://en.wikipedia.org/wiki/File:Inkerman-c1910.jpg 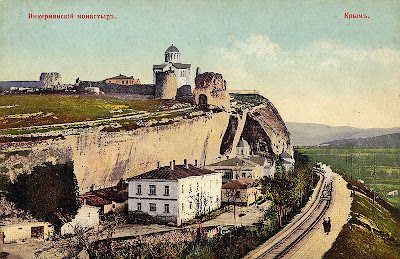 In spite of the continuing bad relations with the Russian bear, the lion-like British went out to the Crimea regardless throughout the 19th century. Even on "sporting" expeditions (huntin', shootin 'and fishin', by George!). Though as Queen Victoria and her family maintained a close association with the Tsar's family, perhaps it isn't so surprising after all. So amongst the RGSSA's relics of Empire we find:


An account of a visit early in the century by an intrepid woman traveller:


Holderness, Mary.
New Russia : journey from Riga to the Crimea, by way of Kiev : with some account of the colonization, and the manners and customs of the colonists of New Russia : to which are added, notes relating to the Crim Tatars. London : Printed for Sherwood, Jones and Co., 1823.


And these three on the Crimea after the war. Firstly, one from the 1870s:


Telfer, John Buchan, d. 1907.
The Crimea and Transcaucasia : being the narrative of a journey in the Kouban, in Gouria, Georgia, Armenia, Ossety,  Imeritia, Swannety, and Mingrelia, and in the Tauric range. London : H. S. King & co., 1876.


Such works afford us, alongside the travels in the Crimea, tantalising glimpses of a way of life and its attitudes which are long gone. How well the travelogue comes over depends on the skill of the writers! But we can actually see the Crimea as it was, in the 19th-century equivalent of the TV colour documentary, Bossoli's volume of tinted lithographs:

I wonder how many of the well-to-do English who trotted along to the Royal Academy to see Bossoli's pictures, and who could afford the big volume of lithographs, contrasted their beauty with Russell's descriptions of the bloody battles in the Crimea, and reflected bitterly upon the folly and waste of war? Not to say on Lord Raglan's stupidity, flinging light cavalry against the guns.


It’s 158 years since the charge of the Light Brigade. Perhaps Tennyson's style is too florid for modern tastes. But whilst the poem seems typically Victorian to us, in the way it stresses the soldiers' gallantry and heroism whilst never wondering if the British even had a right to be in the Crimea, it does also show the waste of war:


All that was left of them,
Left of six hundred.

--
This post was researched and created by Kathy Boyes
Posted by the blog author at 18:45 No comments: